You are here: Home / Investments / Paying dividends from borrowings

In 2015, I met a client who engaged me for comprehensive financial planning. But I was quite frustrated with the outcome because the client did not take up most of my recommendations. In particular, I recalled he did not take my advice to invest in a diversified portfolio. Instead, he preferred to invest 100% of his investable money in just one company.

Company X1 paid very good dividends and was a favourite among many investors. But investing into a single company is not the right way as the concentration risk is too high.

At that time many other financial bloggers had already saw how bad the company was and I warned him to be extremely caution with Company X1 as many were already mentioning it was not a good company.

In this article, I would like to point out why Company X1 was a bad investment. Unfortunately, I cannot disclose the name for fear of negative repercussion. Other financial bloggers stated its name but they can do so because they are not professional financial advisers. Hence, nothing will happen to them. As I am a professional financial adviser, I will get into a big trouble with this company as what I say would carry more weight. In addition, the regulator will deem my disclosure of this company as financial advice to sell or go short on its shares. So I better not mentioned it. Disclosure: I do not have any long nor short position of this company.

The first thing that is not right with the company was its high debts as shown below. 92% of its assets were owned by creditors.

The second thing that was not right with this company was that its current assets were lower than its current liabilities. This means it does not have sufficient liquidity to pay off its short term loans.

It had a pretax earnings of $456.10 million.  Despite its high debts and poor liquidity, it decided to pay most of its earnings to shareholders as dividends. In fact, in the financial year ended 2014, it paid $345.2 million of dividends. This company should have used its profits to lower its debts or increase its liquidity.

So it appears that nothing much had changed. It is still a highly geared company and its liquidity was still an issue. Its pretax profit was $410.3 million. A check at the cash flow for financing statement (page 14) shown that it still paid $346.2 million of dividends similar to that in the past. But what has changed was that it borrowed $300 million from the bond market. What this means was that it borrowed money to pay dividends to shareholders!

I am aware that many companies do this because the cost of borrowing is lower than the cost of equity. For this company, the bond it issued in 2016 cost only 3.55% for a 10 year maturity. Indeed, its cost of borrowing is low (strangely). But this was a company that already had 91% of its assets owned by creditors. How much debt will it need to accumulate? I believe X1 is being pressured to meet shareholders’ expectation of a company that pays good consistent dividends. However, such expectation is ruining this company.

The following is a price chart on how this company was doing vs the STI index. The price chart assumes all dividends are reinvested at zero cost since 1 May 2015:

As it can be seen that the share price is going downhill despite the STI index trending upwards. 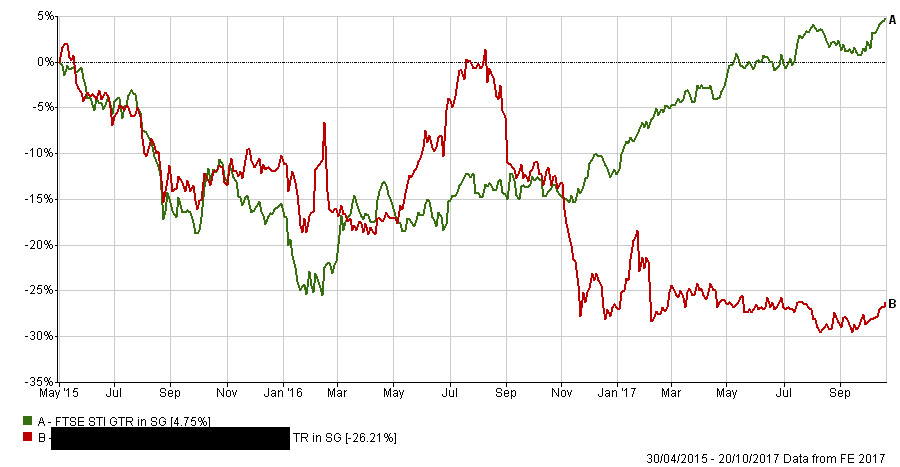 [1] Clients need to login to view the footnotes

[2] Clients need to login to view the footnotes