You are here: Home / Estate Planning / Madam Pusparani, widow of killed Changi Airport worker, is now broke but no fault of hers 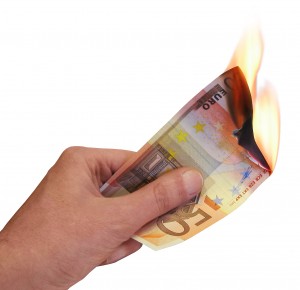 Reasons why Madam Pusparani lost the entire $1m and why is not her fault?

By now everybody have read about the story of a widow named Madam Pusparani Mohan who lost the entire $1 million of money mostly from donors due to poor money management[1]. She was hit by the firestorm from social media which saw countless people cursing her for mismanaging the entire amount within just less than 2 years.

For those who are living in Mars, Madam Pusparani Mohan’s husband Mr. Chandra Mogan died at the age of just 35 years old when he was killed by a hijacked taxi just outside the Budget Terminal on March 2012. Madam Pusparani, also a cleaner then, was left with four young children – three sons aged 9, 8 and 5 and 2 ½ months old daughter.  Without any savings, many donors took pity on her. The Changi Airport Group helped her by collecting donations on her behalf.

Approximately one million dollars were raised consist mostly from donations and a small portion from insurance payout.

The rest was history.

It is not a windfall

Before I continue, $1 million is not enough for the family. She may have thought it is a windfall. The following is a simple needs analysis. I have no idea what were her actual expenditure but I just assumed she need $1000 per month (today’s value) and each child requires $500 per month. Assuming the discount rate is the same as inflation, the following table shows that the total present value of expenditure of the entire family of 5 is $1.09 million. Since she do not have a residential property, the amount require is much higher. Hence, the $1 million donation and insurance payout is insufficient to support her actually.

Many self-professed experts in social media started cursing her for losing the entire million in just two years. In just 3 hours after Straits Times posted the story on Facebook, it received more than 1000 comments and 1,300 likes: 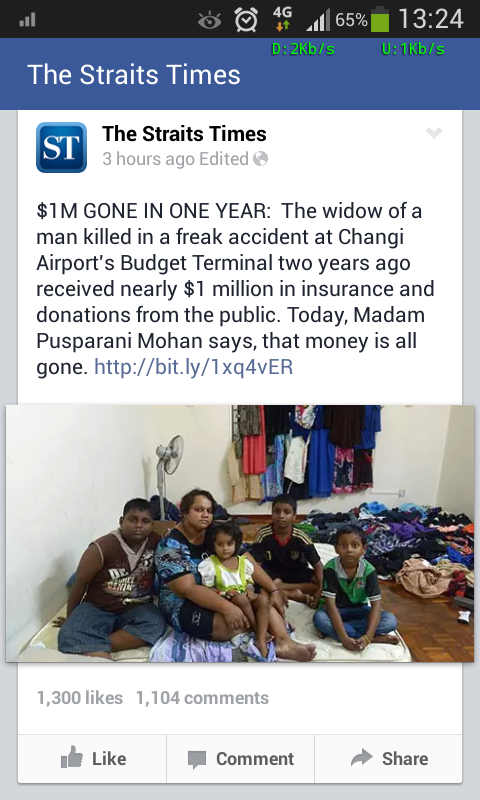 On the main website, the Straits Times’ article had a whopping 128,000 facebook shares after just one day! 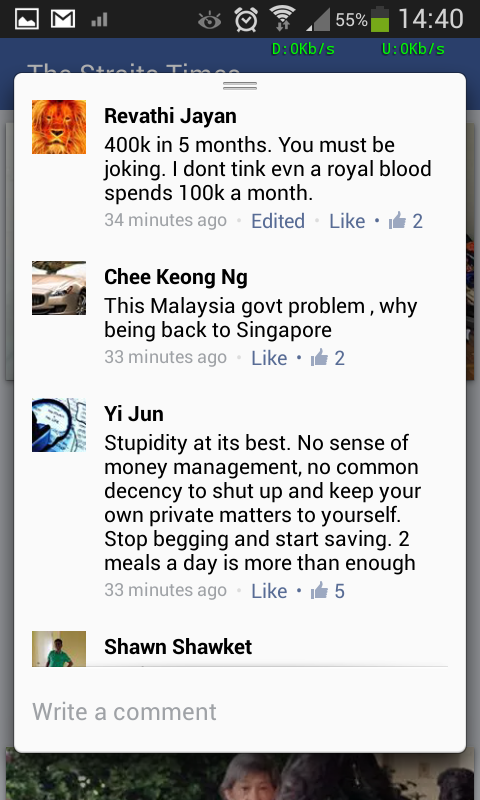 Later on, the comments started to proceed to conspiracy theory that the story was timed to the increase in CPF Minimum Sum! 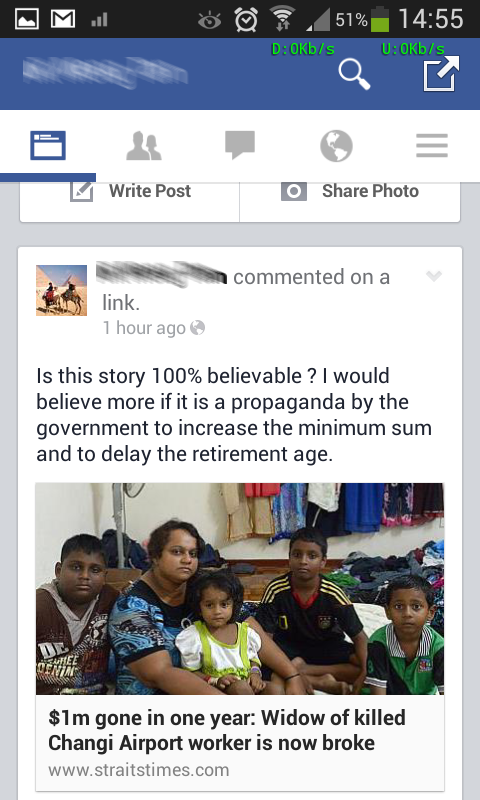 Eventually these self-professed experts became political and totally out of point: 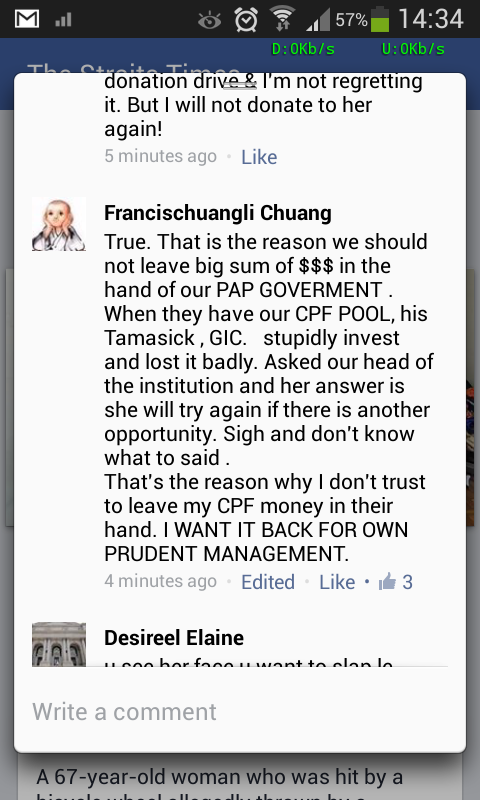 As it can be seen that people with absolutely no experience in financial planning talk nonsense and nobody knows what is happening.  Since many of these self-professed experts were clueless as to what they were saying, can Madam Pusparani be any wiser? It is this reason why Madam Pusparani lost everything because she did not know what was happening when her husband died suddenly.

Didn’t know what was happening

Madam Pusparani did not know how much was raised:

Madam Pusparani said she is not clear how much was collected, but thinks it could be about $800,000. She also received over $100,000 in insurance payouts, she said

Without the knowledge of how much was donated and insurance paid out, it is of no surprised she did not know how much she spent:

That last $400,000 she withdrew lasted her five months. By May last year, she was broke. "I also don't know how I finished (using) the money," she said.

She also did not know whom she was dealing with. I am sure an army of insurance agents and private bankers started harassing her. But she does not even know the identity of financial adviser whom she eventually engaged!

"The CAG financial adviser advised me to divide the money between myself and my four children. After allocating $200,000 to each of my four children, I was left with $150,000."

If you die suddenly, would your wife or husband know what on earth is happening? If you are reading this, it is likely you are a person who cares about financial planning. Your spouse on the other hand is likely the person who is not interested in money management matters. Sounds familiar?

Upon your incapacitation or death, your spouse will not know anything. Would a person who inherited $1m suddenly become savvy? The answer is no.  If your spouse inherits $1m today, how is he or she different from yesterday? Besides having an extra $1m in the bank account, your spouse is exactly the same ignorant person compared to yesterday.

Many of the facebook self-professed and unlicensed financial experts blamed her for mismanagement. I see it differently. She cannot be faulted for ignorant due to the immense pressure she faced during this period of 2 years. However, the couple had nearly one decade to have a proper financial plan to avoid these issues. Unfortunately, the day to day worries over basic necessities took precedent. In fact, the couple would not even be able to afford to have a comprehensive financial plan in the first place. All the professional fee-based financial planners in Singapore target the upper income and high networth families. Even if they would to seek free financial advice, the cost of such free advice is a whopping $351,833!

Still, many well-to-do married couples who can easily afford often refuse to have a proper financial plan but instead prefer to spent money on iPad, travel and luxuries and hence history will repeat itself again. That is why I say this problem will happen to your spouse.

"I was told not to touch my children's money as it was meant for their future," she said, adding that the financial adviser also suggested she could use the remaining money to set up a small business in Malaysia.”

Actually I do not believe her financial adviser advised her to invest in business. But if it was true, it was a bad advice.

In terms of her ability to take risk, she has none of it. This is because the amount that was eventually set aside for her was only $150,000. It does not take a genius to know that this amount will not last her for a very long time. I note that she did not even have a residential property. Her education level was also quite low. Straits Times article stated that her education level was the equivalent of an O-level. Her potential income was low and unstable. Hence, her ability to take risk is zero.

Frankly speaking, considering that she intends to stay in Malaysia, putting all the monies in a Singapore bank as fixed deposit earning 1% may not be a bad idea since the strong Singapore currency is likely to help grow the assets! (From my experience, usually clients hate such ideas because it sounds too simple.)

The weakest link is the client

Despite the good intention in getting her to purchase 4 insurance policies for her children, all the policies were surrendered within 2 years. Surrendering the policies too early would result in penalties and that was where part of her million dollar donation went to. Why was the policies surrendered? Because the client makes the ultimate decisions. In all financial planning advice – the client is the weakest link.

A good financial plan is a bad plan when the client makes the ultimate decision. Unfortunately, the client always make the ultimate decisions. That is why I advocate that everyone must educate themselves financially to avoid making wrong financial decisions. Even if you engage Warren Buffet as your financial adviser, he is of no use to you if you do not have the financial knowledge to listen to him. The financial literacy in Singapore is near zero. For example, 86% of Singaporeans even use whole life policy for retirement!

To make sure Madam Pusparani could not touch the policies, I would have placed all the policies under an irrevocable trust with a commercial trustee so as to avoid the situation of the policies being surrendered. I will not use the insurance nomination under Insurance Act section 49L because it can be easily revoke as long as the trustee agrees. Since the policyholder can easily change trustee who is willing to revoke it, the 49L irrevocable trust is a pretty useless trust. That is why I advocate using a real irrevocable trust. The cost of doing so is negligible since the AUM (asset under management) is quite large.

Instead of asking donors to donate directly to her in her name, the monies should have been placed in a commercial trust. Well, it is easy for me to comment based on hindsight but let this be a lesson for all good intention donors that in the future, do NOT donate directly but instead donate to a trust managed by a MAS licensed trust company!

Still, perhaps putting all insurance policies under trust were probably recommended by the financial adviser but maybe the client refused to execute it because it sounds too complicated and it does cost money to setup a trust. (In Singapore, most people want everything free of charge.)

Madam Pusparani would not have qualified to be an Accredited Investor when she had a million dollar in her bank account. But the truth is that many widows will become one when their spouses die. This is primarily due to one asset – the house.

Most people would have a property with an existing mortgage. Many financial advisers recommend their clients to buy a mortgage reducing term insurance so as to pay off any liabilities in the event the borrowers die. As a result, many widows would suddenly become accredited investors when the mortgages are cancelled due to the insurance payouts. With a property prices so high, becoming a multi-millionaire upon the demise of one spouse is becoming a problem. Why a problem?

When your wife has a million dollar in their bank account due to the inheritance, she will be automatically upgraded to become a private banking customer. That is where everything will fall apart. The auto upgrade will trigger an avalanche of calls from the bank. Getting herself into the Do-Not-Call (DNC) list is no use because it is permitted by law for a bank to call a client with an on-going relationship[2] without the need to check with the DNC list. Having a fixed deposit of $1m with a bank makes her a client with an on-going relationship.  That is why I have clients who often pleaded with me to move their cash out from their fixed deposits so that their banks will think they are as poor as church mouse!

By the way, if your six-years old child inherit your wealth and become accredited investor, can you imagine what will become of him? Have you visited an abattoir?

It is this reason why a widow who has never managed large sum of money before will almost always going to mismanage all the inheritance. Imagine all the calls from relatives, insurance agents and banks. Worst still, after becoming an Accredited Investor due to the inheritance, the law no longer protects your wife from bad advice!

What is the solution?