You are here: Home / Investments / $300m company’s share price sliding down like a falling knife (not referring to Noble)

By now, everybody is aware that Noble’s share has been on a decline by a large magnitude. In fact, its share price is down by a whopping 98.43% compared to 5 years ago

Like Noble, there is another company’s share price that has been sliding down. Unlike Noble, we do not hear much in the news of its dismay stock price performance.

Company X4 (clients are to login to see more details) is a well-known company that is worth $300 million in terms of its market capitalization and it is listed on the Singapore Stock Exchange. The total return for the past 5 years was -67% as shown by the blue line in the chart below. On the other hand, the STI’s total return was up 35% over the same period: 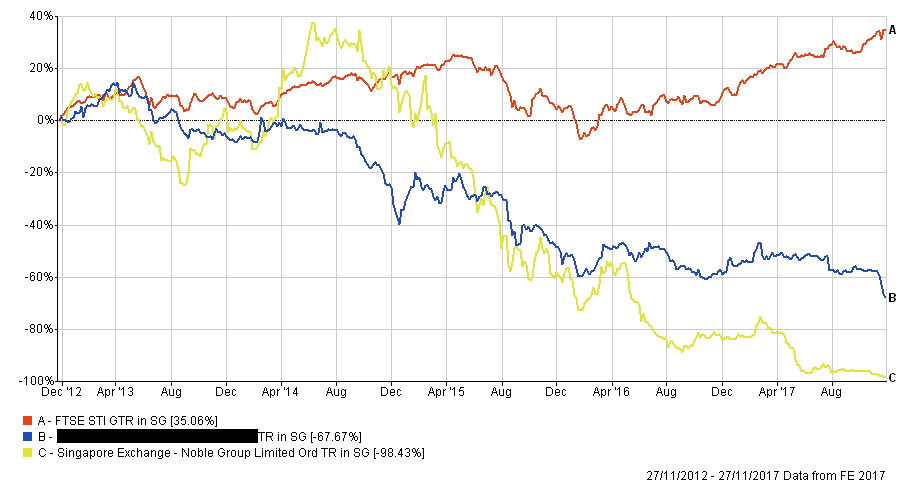 What are the reasons why Company X4 is doing so badly?

Profitable but not to shareholders

In the FY2016, its annual report stated that it has a profit of $4.762 million. Normally when we say “profit”, we refer to the profit earned by equity holders. However, Company X4’s equity holders consists of shareholders, preference and perpetual capital securities holders as well. In this case, shareholders rank last in terms of the company’s earnings.

For the FY2016, the company has to pay a whopping $63.8 million to preference and perpetual capital securities holders. Hence, shareholders end up making a loss of $59 million.

Below are the historical profits of the company taken directly from its annual reports. As it can be seen that the profit of the company has been declining over the past years and yet payment to its preference and perpetual capital securities holders have been increasing to the extend that the earnings of the company are insufficient to support such payment.

Another reason for the slide in share price is due to its negative operating cash flow for many years as can be seen below. The company tried hard to support its cash flow by financing but in most years, it simply keeps on burning cash. If this continue, Company X4 has to sell its assets to support its negative cash flow.

Company X4 has a significant high gearing ratio. In fact, if its preference and perpetual capital securities are reclassified as debts, its gearing is even higher. To calculate its leverage, I use debt-to-asset ratio. Debt-to-asset ratio is a more intuitive ratio as it is simply the percentage of the company assets that belongs to creditors. Other types of leverage ratio like debt-to-equity is not intuitive.

It can be seen that the gearing ratio has been increasing over the years. Currently, a whopping 90.3% of its assets belongs to creditors!

The following can only be seen by clients: