The CPF Member is allowed to have a higher Retirement Account to $241,500.

Hence, those who are 55 this year missed the boat.  This may not be a big deal for many since majority cannot meet their Minimum Sum of $161,000 or now renamed to Full Retirement Sum.

Under current rule, CPF Member who met the $161,000 can withdraw the excess (subject to meeting Medisave Minimum Sum). Some of my clients use it as a piggy bank in which they would not withdraw all the excess but they would do so as once a year.  In the meantime, they allow their excess money in CPF to earn a higher interest.

Since that the rule has changed allowing one to increase the RA to $241,500 (Enhanced Retirement Sum) limit, does it mean that the flexibility to withdraw the money from $161,000  to $241,500 is no longer there once they transfer their money to RA? In fact, under the previous system, a CPF Member is already allowed to have more than the Minimum Sum (but only the amount of Minimum Sum can be used to buy CPF Life and there lies the confusion that the Minimum Sum is actually the Maximum Sum).

I would suggest people to be careful when they opt for Enhanced Retirement Sum and study the liquidity implication carefully.

Ability to withdraw 20% of Retirement Account at Payout Eligibility Age

Ability to postpone the payout start age so as to enjoy a higher monthly CPF Life payout projected to be about 6-7% more.

There is no timeline on when will this be effective.

This will be for those turning 55 in 2015 and will be available in the second half of this year. I think CPF can consider recruiting insurance agents because there will be massive number of agents who are going to lose their jobs because of the Balance Score Card and the Web Aggregator.

This is effective from January 2016.  This means those turning 55 this year has to choose their CPF Life plans.

My current my recommendation is to select CPF Life Basic plan since the returns are higher than CPF Life Standard. However, the CPF Life plans will have to change to take into account that the deferred period is effectively reduced to zero. 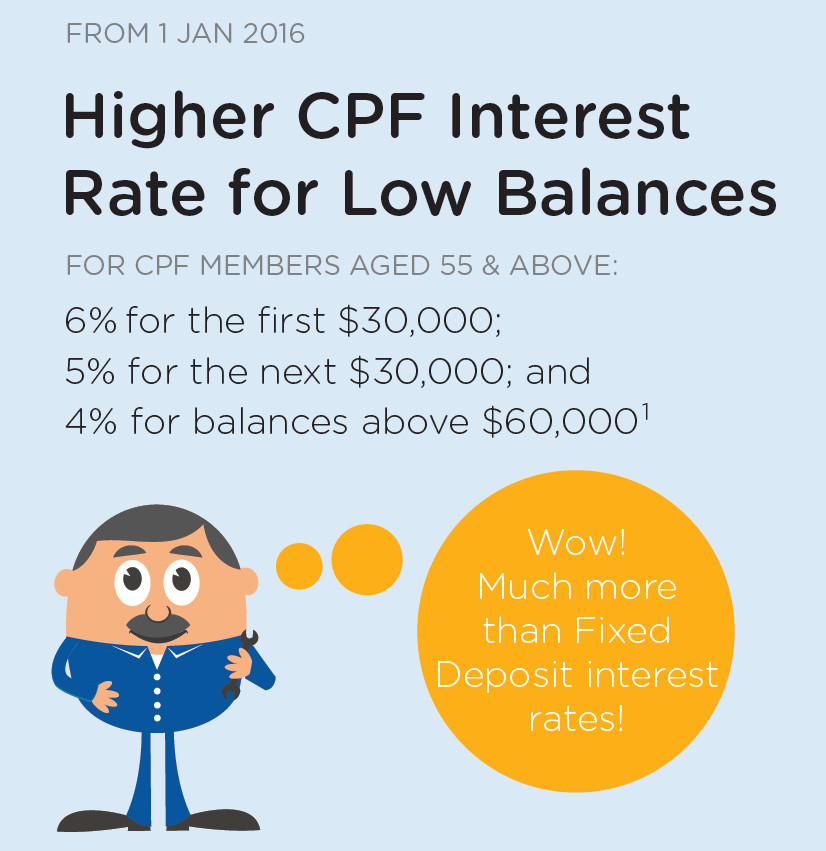 * It is important to note that the base rate is not guaranteed. SMRA base rate is at least 4% until 31 December 2015.

Overall, the CPF changes announced were small tweaks. The fact that CPF Life plans are going to be changed due to the reduction of deferred period to zero just means the goal post has shifted again. So whether will the CPF Life Basic or Standard (or whatever name they going to call it) is anybody’s guess.

What did not change is that the solvency of CPF Life is not guaranteed by Government. I wrote to Straits Times to complain about this ridiculous feature of CPF Life and the Ministry of Manpower replied stating that CPF Life members bear all the bankruptcy risk by having their CPF Life payout reduced. To me this is terrible from financial planning stand point.

The Ministry of Manpower has clarified with Straits Times that members who have already picked their CPF Life annuity plan can now change their minds - but only on a case-by-case basis.

The Ministry “discourages members from doing so [by changing their minds], pointing out that those who have already committed their savings to CPF Life are not worse off.” (Source: Chance to change CPF annuity plans , MyPaper, 23 May 2015).

For those who have just committed to a CPF Life plan, my suggestion is to appeal to have your CPF Life decision reversed so that you can have the flexibility to select the plan when you turn 65. The reason is because there is an assurance that you are not worst off whether to stay with your current plan or leave it in CPF-RA and thus deferring until 65. Given that the goal posts keep on changing nearly every year (i.e. CPF rules keep on changing), it is best to keep your options open and wait and see.

Of course, if there is a financial penalty to reverse the decision, that would be a different story.