You are here: Home / Investments / What we can learn from Warren Buffett? Part 1

BYD Co Ltd was listed on the Hong Kong exchange in 2002.  It was one of China’s biggest rechargeable batteries maker. Berkshire Hathaway - the holding company which Warren Buffett is the largest shareholder - bought 9.9% of BYD in 2008.  Soon after his purchase, the share price surged by a whopping 501% in less than two years. However, at its peak it dropped by a whopping 83% due to various bad news. What were the reasons for the sudden drop?

BYD had apparently unlawfully built serven factories on 112 acres of farmland. This resulted in having its factories confiscated after receiving a fine of US$442,000 from the Chinese government. To make things worst, BYD reported its profit plunged by a whopping 99% in August 2011. Such a bad news could have caused any investors to lose confidence and panic and likely to liquidate as soon as possible. 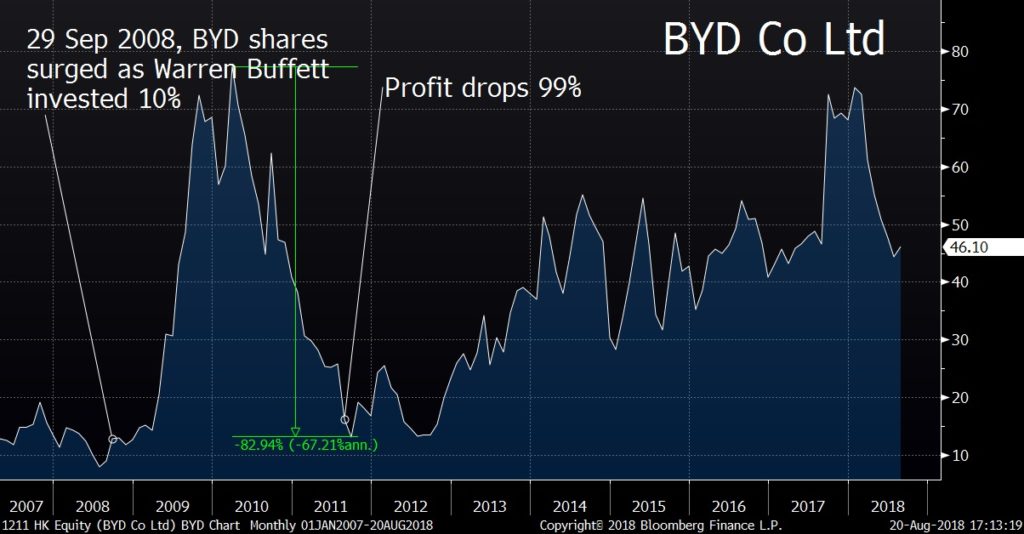 Strangely, Warren Buffett continue to hold the investment despite these horrible bad news.  Warren Buffett is an extraordinary patient man. He appeared to have no emotions and this paid off. Since the date of his first purchase on 29th Sept 2008, his total return of BYD was 296.14% assuming dividends reinvested and before taxes and in HKD. This was equivalent to 14.92% per annum. On the other hand, the HSI Index had a return of just 118.65% total return or equivalent to 8.23% per annum.

In this article, I will examine the reasons why Warren Buffett did not panic and whether did he had a crystal ball to predict that it was going to be a highly profitable investments despite the scandal. Most importantly, how ordinary investors can learn from him.

One important reason why Warren Buffett had such strong holding power was because he did not invest a lot into BYD.

Berkshire Hathaway had S$49 billion of investments in listed companies as at end of 2008. This portfolio exclude its vast subsidiaries. The amount which  Berkshire invested in BYD was only US$232 million or equivalent to just 0.41%. Taking into account of its subsidiaries, the investment in BYD was negligible. As at end of 2017, its investments in public listed companies stood at US$170 billion. With a BYD’s market price of US$1.96 billion, its exposure to BYD was 1.2% only.

What we can learn from this is never invest too much into a single investment. In the event the investment did not turn out well, it will not do you too much harm. It is one  reason that Warren Buffett could hold his investments for such a long term even in the midst of bad news. Even if he would to lose it all, it did not matter. In fact, Warren Buffett had made far more costly mistake previously (continue reading for details).

In the next article, I willl describe another reason why Warren Buffett is able to hold on to his investments.