You are here: Home / Investments / The Parable of the Rich Fool is a good short investor, poor long-term investor 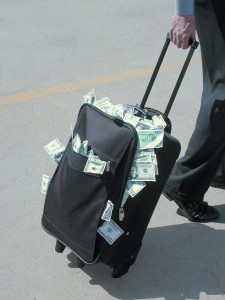 There are many kinds of planning. Time management, project management, business planning, succession planning, estate planning, etc are typical of such planning. How does one plan for short-term and for long-term are entirely different.

For short-term, we know that the concerns are quite immediate. For example, if one would to prepare for marriage, that marriage event is coming up soon. Budgeting, booking the restaurant and the honeymoon travel plans are all considered short-term planning. Short-term planning means that the time-horizon is short. In human terms, these could be just a few months ahead or at most a couple of years. For long-term planning, it usually require a strategy which cannot be implicated immediately. The strategy has to be managed and review is required on an on-going basis. Financial practitioners like me specialize on long-term financial planning. But what has the Bible to say about long-term financial planning?

Someone in the crowd said to him, "Teacher, tell my brother to divide the inheritance with me."  Jesus replied, "Man, who appointed me a judge or an arbiter between you?" Then he said to them, "Watch out! Be on your guard against all kinds of greed; a man's life does not consist in the abundance of his possessions."  And he told them this parable: "The ground of a certain rich man produced a good crop. He thought to himself, 'What shall I do? I have no place to store my crops.' "Then he said, 'This is what I'll do. I will tear down my barns and build bigger ones, and there I will store all my grain and my goods. And I'll say to myself, "You have plenty of good things laid up for many years. Take life easy; eat, drink and be merry." ' "But God said to him, 'You fool! This very night your life will be demanded from you. Then who will get what you have prepared for yourself?' "This is how it will be with anyone who stores up things for himself but is not rich toward God." (Luke 12:13-21)

This passage is called the Parable of the Rich Fool. This passage tells us about a prudent investor who

Make no mistake that the passage does not criticize prudent investment. Instead, the attitude of this person was at fault here. In fact, the investor’s attitudes were far from prudent. The passage tells us a few things about this person’s attitudes:

Is this passage not a good description of most of us? Historically, has there been any evidence that a living thing did not experience death? Has there anyone from the beginning of time which is still living today? What is the probability of death? The insurers’ actuarial consultants will tell us 100%. It does not take a statistician to tell us that actually. With that in mind, how than should we live? Knowing death is imminent will be a rather pathetic situation if we would to stop there. If we just know death is imminent – we call go on to two extremes – over indulgence (“Take life easy; eat, drink and be merry”) or sink into depression and despair as the apparent goal in life seems to end up ultimately in nothingless as advocated by certain school of thoughts.

In the passage, the certain rich man was called a fool primarily because of this reason: “But God said to him, 'You fool! This very night your life will be demanded from you. Then who will get what you have prepared for yourself?' "This is how it will be with anyone who stores up things for himself but is not rich toward God."

The man stored for himself stuff that cannot be brought over when he died. He did not make such long-term plans because he did not think it was important or necessary to be “rich” towards God. It is also possible that such a person does not even believe the existence of God. Richness toward God has nothing to do with material success, networth, career and all these stuff.

The question is - what is meant to be “rich toward God” ?

PS. Read my article to learn that money is created out of thin air: HERE