You are here: Home / Investments / Lessons In The Dot.Com Era

Many of us started investment during the technology dot.com era which resulted in many losing a lot of money. Due to this bad experience, many people turned away from investment permanently. Others picked up the pieces and move on repeating the same mistakes again. To make mistakes is not unusual but not learning from the mistakes is the worst kind of mistake. In this article, we will go back in history and examine the lessons we can learn from the dot.com bubble so that we can make better decisions in our investment plan.

Why the craze over technology companies?

Figure 1 shows the index chart from 1984 to 2005 of the NASDAQ Composite Index. From the chart, there is no obvious point in time which the dot.com started its bull run. For more then one decade prior to year 2000, the NASDAQ has been on a steady ascend. However on 20 July 98, the NASDAQ had a violent correction of -31.98% (in SGD) over just 2 ½ months. It does seem that this correction represents the launching pad for the dot.com madness. Just 2 ½ months after 20 July 1998, the NASDAQ index begins its Mount Everest ascent starting 8 Oct 1998 (marked by number 1 in the chart). The index rose by 269% (SGD) over just 15 months reaching its all time high on 10 March 2000 (marked as 2). Subsequently the bubble burst and the index rapidly declined by -77% (SGD) until 9 Oct 2002 (marked as 3). The decline could have ended earlier if it was not for 911 terrorist attack on United States, which was followed by Afghanistan war. 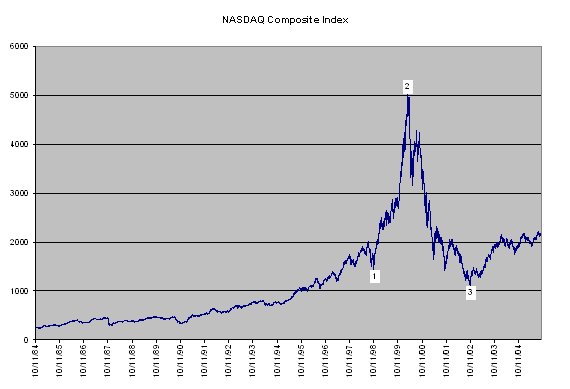 The madness during the dot.com era was the belief that small startup companies were able to leverage on the Internet in delivering services across the globe using what was known as network effect. Suddenly the world became the marketplace so to speak. Many startup offers portal services over the Internet and some even offered free services in hope of drawing large traffic volume so that advertisements through the portals would eventually provide for the profitability of these companies. Typically such companies raised huge capital through Venture Capitalist funding and/or through the issue of shares in the stock exchanges. However, these companies’ debts actually rose rapidly, as it was belief that expansion is more important then profitability. As a result, many of such companies were operating in huge loses. In reality there was no sound business model and neither was there any real products other then nice stories. At the same time, speculators who believed in these stories begin to pure huge amount of money in technology companies. As seen from the chart, the price index rocketed sky high. Founders of these dot.com companies suddenly became millionaires on paper. Employees who were given stock options became paper millionaires too. As we know today, the bubble finally burst. The reasons for the burst were simply because:

In other words, there was nothing fundamentally good about these companies. In fact, any investment that seems to be attractive but is not supported by sound fundamentals is guaranteed to be money losing. There were a few dot.com survivors such as Yahoo and Amazon but these surviving companies were the minority. Majorities finally call it a day.

The rush into technology funds

Over at home front in Singapore, many technology funds were launched during this period. It is unfortunate that the first investments made by many Singaporeans were technology funds. Many had the misfortunate of using their retirement funds in CPF for such investment – or rather speculation. 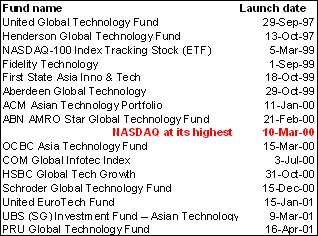 Table 1 shows the various dates which these technology funds were launched. There were many funds that were launched before the peak and after the peak. The table does not include funds that "died" eventually. Funds that were close down are Allianz Dresdner’s Global Technology, Global Multimedia and Global Software. Note that UOB’s Eurotech Fund was reported to have close down recently although it is in Table 1.

With such huge number of funds being launched during this period, we can learn an important lesson: never chase after the latest hot funds and never invest in something just because the crowd is doing so.

In Figure 2, we place the launch dates on the NASDAQ chart. 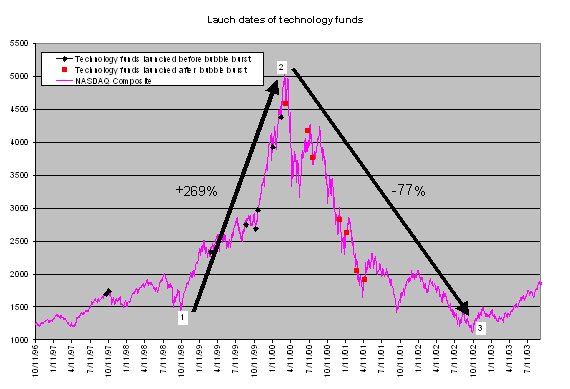 Also according to Figure 2, the fact that fund managers continued to launch seven funds after the bubble burst tells us that the professionals either did not know that the market was in the bear or they had no idea when the market would recover. In fact, the market never recovered until 9 Oct 2002 (actually it is debatable whether recovery had even began).

Many people who invested in technology funds were poorly diversified. There was no proper portfolio planning. Would a diversified portfolio have helped? When the bubble burst, how did other asset performed? Table 2 shows the performance of various asset classes in the years 2000 to 2002.

From the table, we can see that investment grades bonds and emerging market debts and REIT did very well during this market crash. This shows the importance of being diversified. Thus we can learn that one must never attempt to unreasonably overweight on any sector or region and must always be diversified across all countries and assets at all times.

The Relative Performance of Individual Funds

Table 3 shows the performance of technology funds since its inception and its performance relative to their benchmarks. Three funds did not publish its benchmark returns. We had to use the NASDAQ’s returns as replacements. From Table 3, we see that the relative performance are mostly in red. This means that a great majority of the funds underperformed its benchmarks. Some underperformance were as large as –38.9% while some could slightly outperform by 2.18%. The lesson here is that while many investors lost money because of market crashed, many lost even more money because of poorly managed funds. Therefore there is a risk of losing much more money in poorly managed funds. Investors must avoid poorly managed funds at all cost – not just technology funds but any funds in general.