You are here: Home / CPF Matters / The Tragic Liberalization of the CPF Investment Schemes

This is a very brief history of the CPF Investment Scheme.

When the investment scheme was first introduced on 1 May 1986, it was known as the Approved Investment Scheme (AIS) which allowed CPF members to invest a portion of their CPF-OA above their minimum sum in stocks, unit trusts and gold.

In Oct 1993, the AIS was renamed Basic Investment Scheme (BIS) and the Enhanced Investment Scheme (EIS) was implemented. These schemes further increase the amount which CPF members can invest using their CPF. The instruments that can be invested were expanded to include SESDAQ, government bonds, bank deposits, fund management accounts and endowment policies. This liberalization saw a surge in CPF withdrawal.

In 1997, the BIS and EIS merged to form the CPF Investment Scheme (CPFIS). Investments available were further expanded to include unit trusts which invested in regional stock exchanges of Malaysia, Thailand, South Korea, Taiwan and Hong Kong.

In 2001, the CPFIS were further liberalized to allow the full Ordinary Account to be invested in a variety of products. Moreover, for the first time CPF Members could invest their special account.

For every liberalization, there was a surged in CPF withdrawal. The peaks in withdrawal correspond with the liberalization of the CPF investment schemes. The peak for 1993, 1997 and 2001 were $4.1 billion, $3.1 billion and $3.7 billion respectively.  See withdrawal chart below. 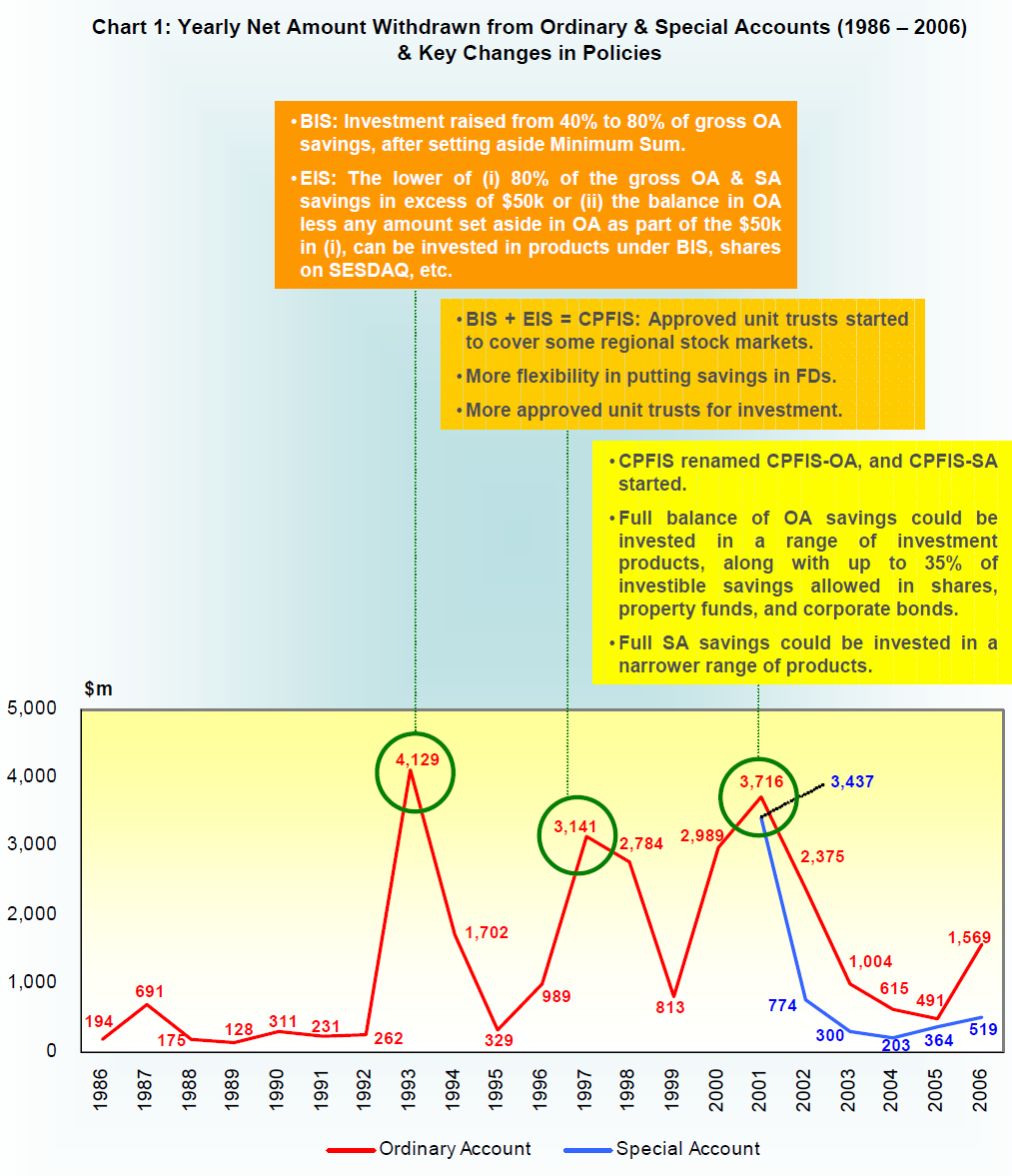 Unfortunately, the spike in CPF withdrawal also corresponded with the peak of the stock market! The following is a chart which I superimposed the CPF withdrawal chart with the performance of the STI index. The STI Index is the black line.

The 1993 CPF investment liberalization occurred just one year from the 1994 peak.  The 1997 liberalization was on the same year as the Asia Financial Crisis. The chart shows the maximum withdrawal from CPF to invest was right at the top of 1997!!

But of particular interest was the 2001 CPF withdrawal peak. Well, 2001 was not the peak of the market because it was soon after the dot.com bubble burst less than a year ago. However, CPF withdrawal was already surging nearly at $3 billion (close to the previous 1997 withdrawal peak) in 2000 which was exactly when NASDAQ was its highest. To be precise, NASDAQ was at its highest on 10 March 2000.  When the CPFIS were further liberalized in 2001 to allow the full Ordinary Account to be invested, it was the final nail to the coffin because CPF Members were incurring hefty and massive losses over just 8 years of investing right at the peaks of the market – not once but three times!

I was already a working adult when the dot.com bubble burst. I recall that just over a year since the banking sector was liberalized.  Technology unit trust funds were pushed to the grandmothers, grandfathers, the Chinese educated, young and old all were not spared.  Due to the endorsement effect, many investors bought these technology funds using their CPF because they assumed these funds were safe since it was promoted by banks they trusted. My own parents used to tell me that whatever products promoted by banks must be good. Well, they stopped saying that now. For the young reading this article may find it strange how come people actually can trust the banks? Well, Singapore banks used to be the good guys. Ever since Singapore banks adopted the Wall Streets style of running business, life was never the same again.

It is interesting to note that the STI Index rebounded in 2003 and started its bull run. However, the CPF Withdrawal rate dropped to just $1 billion which was less than 30% of the previous peak withdrawal in 2001. This shows CPF Members missed the bull run.

For those wondered what happened after 2006, well the financial industry sank to a new low due to the emergence of massive churnings using CPF monies because many CPF members wanted to make an early withdrawal.  It took sometime before these churners were caught but the damage was already done.

My purpose of writing this article is to proof that investors always invest at the peak and never at the bottom of the market. The second purpose is to show that financial salespersons cannot be trusted. These days, financial salespersons come with fancy title such as Financial Consultant, Independent Financial Adviser (IFA),  Relationship Manager and what not. The only solution is that investors must educated themselves and stopped being lazy. There is no other way.

For further reading, here are some interesting articles I wrote:

This is a very old article I wrote in 2005 which is still relevant today: Lessons In The Dot.Com Era.