You are here: Home / Investments / Total Cost of a Tertiary Education

A LOCAL tertiary education is 860% more expensive then the entire school fees from primary school to junior college. A local medical degree is 3341% more expensive then the first twelve years of school fees. It cost $2,472 in school fees to have a student educated for the first twelve years. On the other hand it cost $23,720 of tuition fees for a non-medical bachelor degree with the National University of Singapore. For a medical degree, it cost $85,050 in tuition fees. 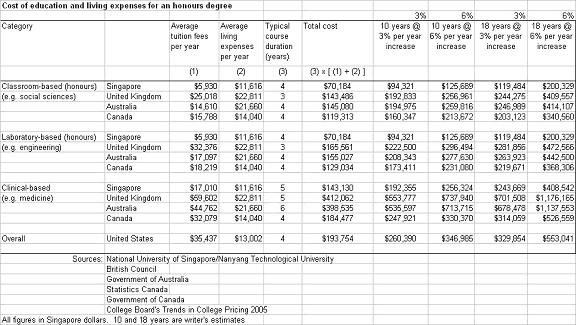 Whether it is for overseas or local studies, the cost of university education has been marching up - and can be expected to continue to do so. In Singapore, the cost will rise with inflation, government subsidy and university policy. These are, more or less, the same factors that drive cost increases overseas.For the three local universities - the Singapore Management University, National University of Singapore (NUS) and Nanyang Technological University (NTU) - the government subsidises an average of about 70 per cent of the tuition fees. The exception is a medical degree at NUS. Nearly 80% of the tuition fee is subsidised.As a result, studying locally is the most economical option for Singapore citizens and permanent residents.

With little or no subsidy for Singaporeans, an overseas education will require deep pockets.

Not only that, the cost of living in many of the popular destinations of Singaporean students is higher compared with the annual average of $11,600 or $967 a month in Singapore. For example, in Australia, the cost of living averages $21,600 a year, in part because of accommodation costs.

An honours degree in Britain requires three years of study. It is four years in Singapore.

Even within a country, tuition fees vary from state to state. According to the Association of Universities and Colleges of Canada, the annual tuition fees for general arts and science programs lie between $9820 to $23,118 in Ontario while a similar program in Manitoba cost $7121 to $10,631.

The reputation and quality of a university make a difference, too. At the Imperial College of London, which is well-known for its engineering courses, the tuition fee for an electrical and electronic engineering undergraduate course is 47 per cent higher than the average cost of a laboratory-based degree course in Britain.

PREDICTING the future cost of education is a complicated affair. The subsidies for Singapore tertiary education depend largely on government policy.

In 1992, Singaporeans and permanent residents received 80 per cent of government subsidy for non-laboratory-based undergraduate studies in NUS. Today, the subsidy is 70 per cent.

By my estimates, the reduction in subsidy almost entirely accounts for the increase in tuition fees paid by Singaporeans and permanent residents over the past 14 years.

In addition, the fact that both NUS and NTU have been given financial autonomy further increases the difficulty of predicting future fees increases.

The future cost of education also depends on inflation. In Singapore, the inflation rate has been 1.34 per cent a year for the past 20 years.

Tuition fees for the past decade at private four-year colleges in the United States rose by an average of 5.7 per cent, or 3.2 per cent a year, after adjusting for inflation.

Another example is Canada. Inflation had grown by an annualized rate of 2.77 per cent for the last twenty years. Despite a modest historical inflation, Canada’s average fee increase for international students for the past one year was a surprising 6.70 per cent.

The cost of overseas education also depends on foreign-currency rates.

Take the Australian dollar, for example. From 1990 to 2000, it depreciated against the Singapore dollar by 27.46 per cent. This was good news for parents whose children were studying there. But to the dismay of many parents whose children have gone to Australian institutions during the past five years, the currency proceeded to appreciate by 14.85 per cent against the Singapore dollar.

A general rule of thumb in forecasting is to add a few percentage points to the historical inflation rate. If the cost of an education is assumed to increase by 6 per cent per year, a four-year local tertiary degree could cost more then $125,000 in 10 years' time.

The figures are astronomical for an overseas education. In 18 years' time, a medical degree in Britain would cost more then $1.1 million.