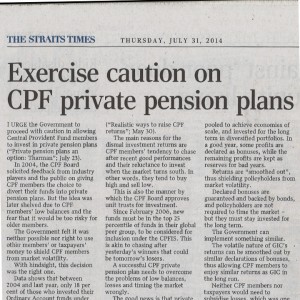 The following letter was published in Straits Times on 31 July 2014 regarding CPF Private Pension Plans:

In 2004, the CPF Board solicited1 feedback from industry players and the public on giving CPF members the choice to divert their funds into private pension plans. But the idea was later shelved due to CPF members' low balances and the fear that it would be too risky for older members.

The Government felt it was neither possible nor right to use other members' or taxpayers' money to shield CPF members from market volatility2.

With hindsight, this decision was the right one.

Data shows that between 2004 and last year, only 18 per cent of those who invested their Ordinary Account funds under the CPF Investment Scheme (CPFIS) made net profits in excess of the OA interest rate ("Realistic ways to raise CPF returns"; May 30).

The main reasons for the dismal investment returns are CPF members' tendency to chase after recent good performances and their reluctance to invest when the market turns south. In other words, they tend to buy high and sell low.

This is also the manner by which the CPF Board approves unit trusts for investment.

Since February 2006, new funds must be in the top 25 percentile of funds in their global peer group, to be considered for inclusion under the CPFIS3. This is akin to chasing after yesterday's winners that could be tomorrow's losers.

A successful CPF private pension plan needs to overcome the problems of low balances, losses and timing the market wrongly.

The good news is that private insurance companies have overcome such problems.

Policyholders' funds are pooled to achieve economies of scale, and invested for the long term in diversified portfolios. In a good year, some profits are declared as bonuses, while the remaining profits are kept as reserves for bad years.

Returns are "smoothed out", thus shielding policyholders from market volatility.

Declared bonuses are guaranteed and backed by bonds, and policyholders are not required to time the market - but they must stay invested for the long term.

The Government can implement something similar.

The volatile nature of GIC's returns can be smoothed out by similar declarations of bonuses, thus allowing CPF members to enjoy similar returns as GIC in the long run.

Neither CPF members nor taxpayers would need to subsidise losses, which was one of the concerns over a CPF private pension plan.