What is the Balanced Score Card? Imagine you work for a company and your boss tells you that from 1 January 2016, you will receive 12 months of your salary if you meet certain KPIs. If you do not meet the KPIs, up to 7.2 months of your salary will not be paid to you. If you perform extremely well far exceeding the expectations, the company will not recognise your efforts in terms of extra bonuses. To put it another way round, your performance bonus ranges from -7.2 months to 0 months.

Do you want to work in this type of company which will withhold up to 7.2 months of your salary on an annual basis but will never give you additional bonuses for doing well? Of course not! But if you are desperate to work, you will do everything to avoid getting such a pay cut but you will never do more than it is required since the company will not recognise your additional efforts.

Although I support the Balanced Score Card framework in principle, I disagree with the Monetary Authority of Singapore that it will motivate financial advisers to do well in terms of advisory quality. The Balanced Score Card will reduce the number of complains but it could actually results in a greater cost for consumers.

The following letter was published in the Straits Times’ forum page on 28 December 2015. My original title of the letter was “Balanced Score card framework encourages mediocrity” but they have kindly change to a more polite title “Use incentives to spur financial sales reps”: 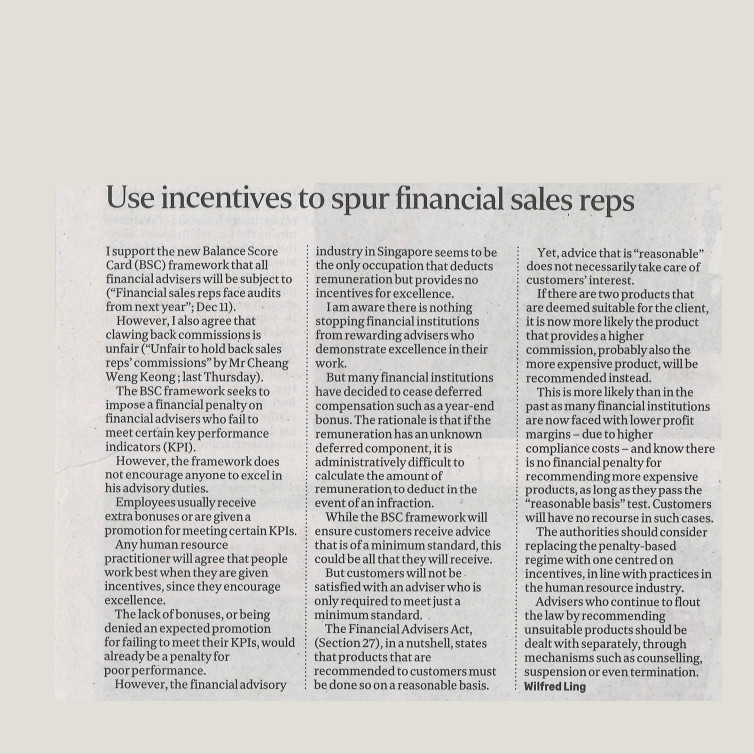 I support the new Balanced Score Card (BSC) framework that all financial advisers will be subject to ("Financial sales reps face audits from next year"; Dec 11).

However, I also agree that clawing back commissions is unfair ("Unfair to hold back sales reps' commissions" by Mr Cheang Weng Keong ; last Thursday).

However, the framework does not encourage anyone to excel in his advisory duties.

Employees usually receive extra bonuses or are given a promotion for meeting certain KPIs.

Any human resource practitioner will agree that people work best when they are given incentives, since they encourage excellence.

The lack of bonuses, or being denied an expected promotion for failing to meet their KPIs, would already be a penalty for poor performance.

However, the financial advisory industry in Singapore seems to be the only occupation that deducts remuneration but provides no incentives for excellence.

I am aware there is nothing stopping financial institutions from rewarding advisers who demonstrate excellence in their work.

But many financial institutions have decided to cease deferred compensation such as a year-end bonus. The rationale is that if the remuneration has an unknown deferred component, it is administratively difficult to calculate the amount of remuneration to deduct in the event of an infraction.

While the Balanced Score Card framework will ensure customers receive advice that is of a minimum standard, this could be all that they will receive.

But customers will not be satisfied with an adviser who is only required to meet just a minimum standard.

The Financial Advisers Act, (Section 27), in a nutshell, states that products that are recommended to customers must be done so on a reasonable basis.

Yet, advice that is "reasonable" does not necessarily take care of customers' interest.

If there are two products that are deemed suitable for the client, it is now more likely the product that provides a higher commission, probably also the more expensive product, will be recommended instead.

This is more likely than in the past as many financial institutions are now faced with lower profit margins - due to higher compliance costs - and know there is no financial penalty for recommending more expensive products, as long as they pass the "reasonable basis" test. Customers will have no recourse in such cases.

The authorities should consider replacing the penalty-based regime with one centred on incentives, in line with practices in the human resource industry.

Advisers who continue to flout the law by recommending unsuitable products should be dealt with separately, through mechanisms such as counselling, suspension or even termination.

I was asked what will happen to the industry when the Balanced Score Card is fully implemented next year.

In my opinion, we can stereotype an adviser based on sales and quality of advice. There are four stereotypes:

Prior to Balanced Score Card, an adviser who is good in sales usually will stay for long-term. Now, even those who are good in sales will consider leaving the industry simply because there is no incentive but only punishment!

From the above analysis, it can be seen that the financial advisory industry is bleak and has no potential upside at all.

Update 2 January 2016 - response from another forum writer on BSC

The reasonable basis requirement of the Financial Advisers Act requires an adviser to take into account factors relating to the customer and product ("Use incentives to spur financial sales reps" by Mr Wilfred Ling; Monday).

He has to consider the customer's investment objectives, financial situation and particular needs.

He is also required to have conducted investigation and gained knowledge of the product by performing product due diligence.

Putting the two components together, an adviser is then to assess and recommend a product that is suitable to the customer.

This process takes care of a customer's interest.

The problem of recommending a product that pays the adviser a higher commission can be better resolved by banning product commissions.

The Monetary Authority of Singapore (MAS) considered such a measure in 2013 ("S'pore 'not ripe' for fee-based finance advice"; Jan 17, 2013). Though it was not eventually implemented, the MAS said it intended to review it again after a period of time.

In fact, a number of countries, such as Britain, Australia and the Netherlands, have introduced the removal of commissions, and it has been found to reduce product bias in adviser recommendations.