You are here: Home / Investments / Retirees, here is an example of converting capital gains to an income stream

I have written a number of articles on why it is important to focus on total return instead of just looking at dividend yield of an investment. I even did a video on this. In this article, I want to provide an example of why total return approach is important for a retiree. It is a practical example because the example can be done in real life. This article is also suitable for non-retirees because I will touch on the impact of dividends reinvestment.

Retirees need constant streams of passive income to meet their expenses. Passive income can come in various forms such as:

I want to focus on the 4th point – investment income.

Most retirees thought that investment income means collecting dividends and coupons from bonds. As a result, they would focus on instruments that pay out dividends. For aggressive retirees, they look at REITs and stocks. For conservative retirees, they would look at anticipated endowments and annuities. In either case, they just look at the dividends or coupons from the products. I would like to advocate a total return approach.

I use an example product – a unit trust which is a balance fund investing in Asia. Due to compliance restrictions, I cannot disclose the actual name of the unit trust as that would be perceive I am recommending the product without needs analysis (on the other hand, many self-professed gurus bloggers and seminar trainers can say anything they like including misleading and false advertising because they are not subject to any form of regulatory oversight since they are unregulated persons. It also means they take no responsibilities in what they say as the objective is to generate traffic for google ads and making money from investment course fees).

The data I use is from 31 July 2003 (around the time the fund was launched) until 31 March 2014. Assuming an initial investment of $1,000,000, the dividend yield was around 3% throughout the period. Dividend yield is defined as annual dividend collected divided by the market value. Note that it is not divided by the cost price. Those who are crazy over dividend yields would find this dividend yield of 3% to be too low. So they will ignore such investments. 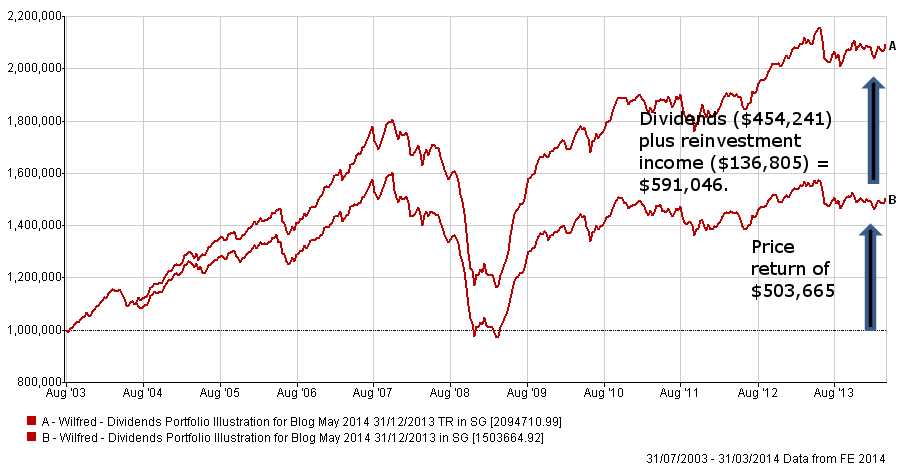 One of the common objections of total return approach for a retiree is how to generate a sufficient income stream if the dividend yield is too low. In the above example, 3% dividend yield is too low for most retirees to meet their personal expenditure. The good news is that in today’s technology, it is possible to convert capital into a stream of income so that it looks like ‘dividends payout’. Such a technology is already available for many years and does not even cost a single cent to implement it.  The reason why this is not popular is due to lack of awareness. Of course, nobody will invest $1 million into a single fund but to a diversified portfolio of funds. Nevertheless, the technology is able to support converting a portfolio of funds into income stream. How does it work?

How to generate a fixed dollar method income stream?

Back to the $1 million investment example. Let’s say the retiree wants to get $50,000 of annual income from it to meet his expenditure. This is equivalent to 5% pa of the initial investment or $4167 monthly. This can be done automatically without human intervention once the standing order is done. The following is the chart showing the illustration of the value of the fund over the period when $4167 was withdrawn every month. Since the dividends on most years were less than $50,000, it implies there was capital liquidation. 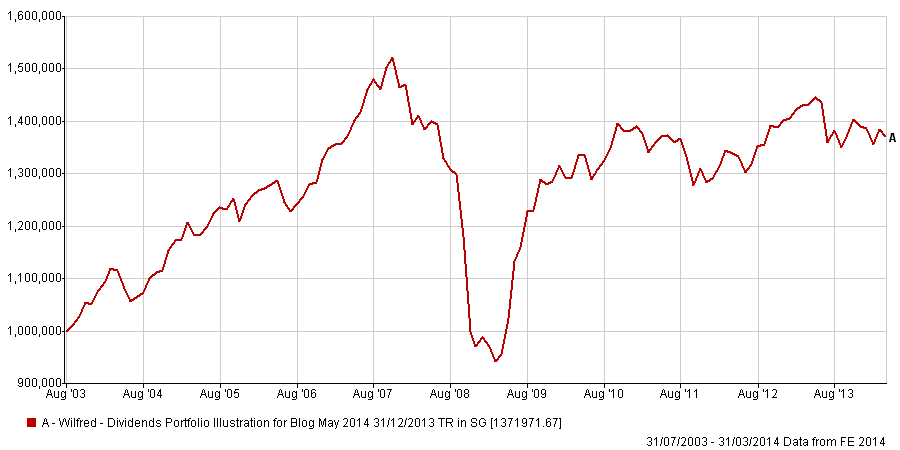 The value of the fund based on fixed dollar withdrawal of $4167 a month. Click to enlarge image.

How to generate an income stream based the variable method?

This would mean that the income stream is based on the percentage of the portfolio at the point of liquidation. This method cannot be automated and so will involve a manual sell transaction. Fortunately in the age of technology, this can be done online. The following chart is an example of the retiree liquidating 5% of the market value of the fund at the end of every year. Any dividend declared during the year is automatically reinvested. 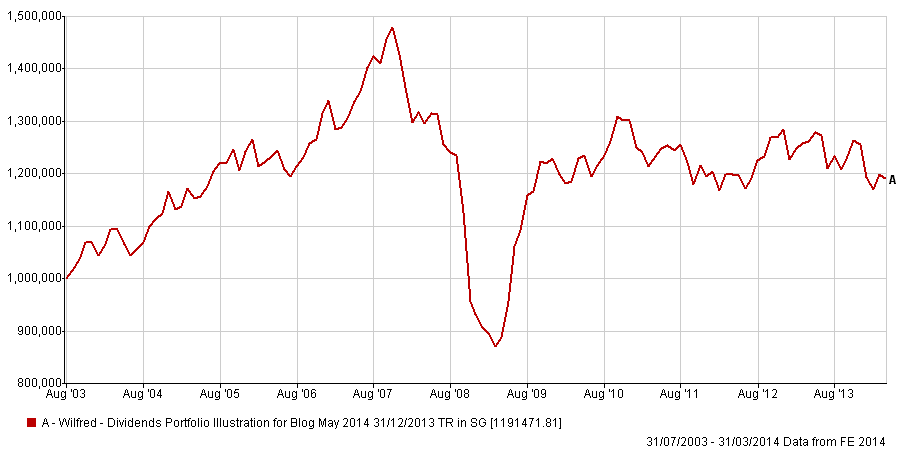 Value of the fund when 5% of the market value at the end of every year is liquidated to meet the retiree’s expenditure. Dividends were reinvested during the year. Click to enlarge the image.

Advantage of the variable method:

Disadvantage of the variable method:

Given a portfolio, how to automatically sell to create an income stream?

At this point, you probably realized that the recommended income stream method is the fixed dollar method because it is largely automated.

Nobody would invest all their money into a single fund. Very often it is a combination of diversified funds. There are three selling algorithms available:

In real life, all three methods mentioned above have their purposes. However, the optimum selling algorithm depends on the asset allocation methodology which calls for another article for another day.

You can also view a video from Vanguard which basically speaks of similar strategy. However, Vanguard do have a modified approach which they mentioned at the end of the video:

See this link for our Passive Income Planning for Retirees service.