You are here: Home / CPF Matters / Regulation of CPF nominations not feasible 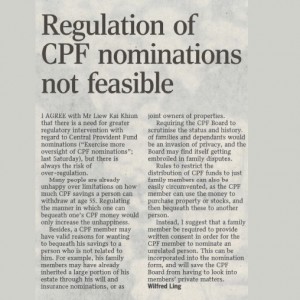 There was a case in which a man nominated his entire CPF to his ‘goddaughter’. Although his widowed wife tried hard to contest the nomination, she failed and incurred legal costs equivalent to the amount of CPF money the man had!

I AGREE with Mr Liew Kai Khiun that there is a need for greater regulatory intervention with regard to Central Provident Fund nominations ("Exercise more oversight of CPF nominations"; last Saturday), but there is always the risk of over-regulation.

Many people are already unhappy over limitations on how much CPF savings a person can withdraw at age 55. Regulating the manner in which one can bequeath one's CPF money would only increase the unhappiness.

Besides, a CPF member may have valid reasons for wanting to bequeath his savings to a person who is not related to him. For example, his family members may have already inherited a large portion of his estate through his will and insurance nominations, or as joint owners of properties.

Requiring the CPF Board to scrutinise the status and history of families and dependants would be an invasion of privacy, and the Board may find itself getting embroiled in family disputes.

Rules to restrict the distribution of CPF funds to just family members can also be easily circumvented, as the CPF member can use the money to purchase property or stocks, and then bequeath these to another person.

Instead, I suggest that a family member be required to provide written consent in order for the CPF member to nominate an unrelated person. This can be incorporated into the nomination form, and will save the CPF Board from having to look into members' private matters.

Update 11 December 2014: Agnes Sng felt that the individual should have the absolute right to select his own nominee:  CPF members should be free to pick nominees