You are here: Home / Investments / Spectacular collapse of the LM Investment Management Limited

I was first introduced to LM Investment Management Limited by an institution on May 2008. It was to be offered to high networth or Accredited Investors. It was an Australian fund manager. The fund that was introduced to me was the LM Currency Protected Australia Income Fund. The returns were generally 100bps more than the standard fixed deposit rates as shown below: 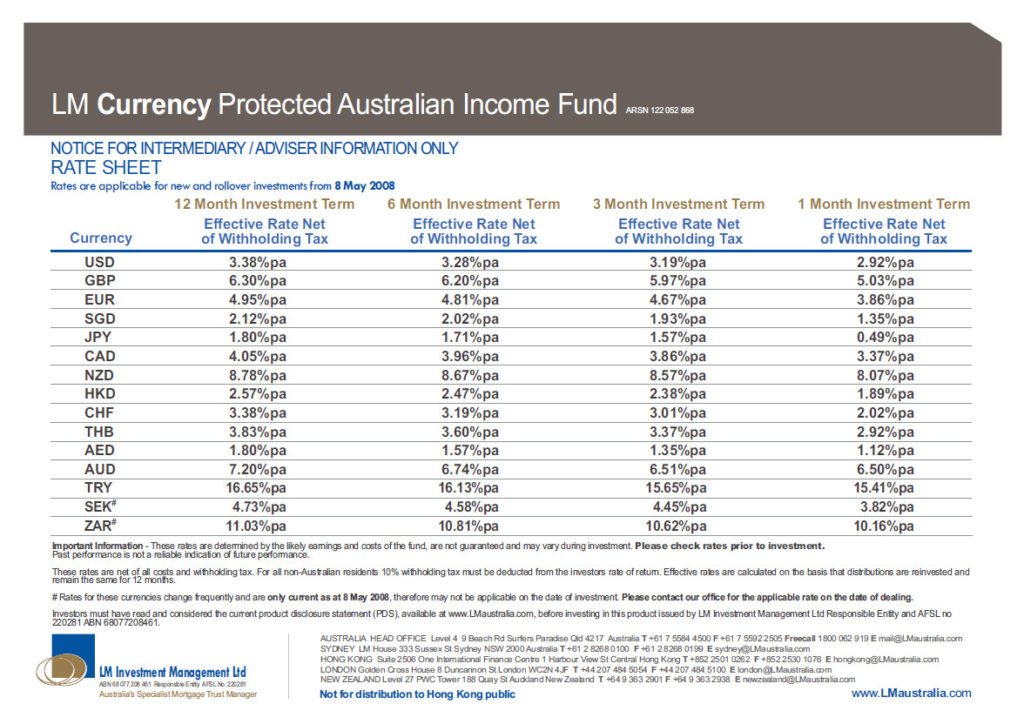 Despite its attractive returns, I was not keen because the fund invested in the LM First Mortgage Income Fund.  I was not keen in such investments due to the mortgage lending issues in the United States. Although this was Australia, I was already disinterested.

Somewhere in December 2008, my Principal was approached to distribute LM Investment Management Limited’s funds. The manager in charge of reviewing strategic tie-up decided not to sign up with them. The reasons were not known to me. However, the representatives of LM Investment Management Limited specifically wanted to meet me and another adviser in the firm probably because they heard that both of us served high networth individuals. I made some excuses not to meet them.

On 19th March 2013, voluntary administrators[1] were appointed for the LM Investment Management Limited.

On 9 April 2013, the company’s Australia financial services license was suspended[2].

On 1 August 2013, creditors decided to wind up the company.

According to public[5] documents, LM Managed Performance Fund made a series of loans to Maddison Estate Pty Ltd which Peter Drake owned and controlled. The loans were granted to Maddison Estate Pty Ltd to develop a property development in Gold Coast. However, Peter Drake was also the sole director and the beneficiary of a discretionary trust, managed by another company controlled and owned by him, that held all the beneficial ownership in the company.

By August 2012, an accumulative A$280 million of the loan were already extended to Maddison. However, no construction work had commenced on the development, no plans of subdivision had been registered and none of the proposed housing lots had been sold.

According to media report[6], the LM Managed Performance Fund had A$400 million invested at its peak. There were 80 financial advisers who channelled over A$1 million into the fund.

The question is whether could a financial adviser foresee this. While all investments carry risks, there were apparently tell-tale signs that all was not well. For example, if the fund cannot allow redemption, why did it allow new investments?

You can read a detailed article by South China Morning Post on the number of lives destroyed: When an investment fund goes bad.

What lessons can be learnt?

The lesson is that commissions can really sway the objectively of the financial adviser. This is the real world and it will be naïve to say that commissions have no influence over the adviser’s recommendations. But the question is this: Would the client be willing to pay for a fee? If he is willing, will he be willing to pay at a reasonable price? My experience shows that the high networths are the least likely to pay a fee for advice. I don’t know why but probably is because the richer a person, the more miser he is.

For me, I always charge a reasonable fee to all my clients for advice.

But there are two types of clients that I will decline to take on as soon as practically possible: