You are here: Home / Letters to the Press / ST forum: Overcoming emotional barriers to lease buyback

Today, Straits Times publish my letter relating to the Lease Buyback Scheme. However, they had edited and reduce the length of my letter by 38% to the extend that the seriousness of the issue have also been watered down significantly. The following is the unedited version: 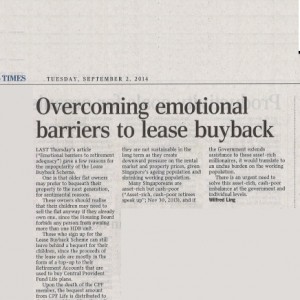 The article last Thursday (“Emotional barriers to retirement adequacy”, 28 August 2014) gave a few reasons why the Lease Buyback Scheme is not a popular scheme although it was introduced since 2009.

One reason mentioned in the article is because older flat owners prefer to bequeath their property to the next generation due to sentiment reasons.

However, these owners must realise that if their children already own a HDB flat, their children still need to sell the flat anyway since current HDB rules forbid any persons to own more than one HDB property.

Older owners can still sign up for the Lease Buyback and yet still achieve the desire to leave behind a bequest for their children because proceeds of the sale of the tail-end of the lease are mostly in the form of top-up to CPF Life.  Upon the demise of the CPF member, the bequest amount from the CPF Life is distributed either through CPF Nomination or intestacy laws.

The other reasons mentioned are the availability of other more attractive options such as subletting and downsizing to a smaller property.

In fact, these two methods are the only methods available for 5-room HDB and private property owners. These methods are not sustainable in the long-run as it has the tendency to create a downward pressure in the rental market and property prices given Singapore’s aging population and a shrinking working population.

At current birth rates and without immigration, there will only be 2.1 working adults for each citizens age 65 and above in 2030. This is compared to 6.3 working adults in 2011 (see http://population.sg/key-challenges) .  Increasing the immigration rate to prevent the population from aging were also met with some resistance (“ESM Goh pleased S'poreans debating population issue”, 18 February 2013).

Since many Singaporeans are asset rich but cash poor, the long-term downward pressure in asset prices would be catastrophic.

The problem of being asset rich but cash poor has already started to show its problems as there were reports of retirees sitting on million dollars properties asking for government assistance (“Asset-rich, cash-poor retirees speak up”, 30 November 2013).  If the government adopt a policy of extending its assistance to these asset rich millionaires, it would also put an undue tax burden on the shrinking working population.

There is an urgent need to solve this imbalance of being asset rich but cash poor both at the government and individual levels. Property prices cannot go up indefinitely and is likely to come down hard as the population aged.