You are here: Home / Estate Planning / Lawyer Johnny Cheo Chai Beng sued for not knowing how to prepare a will

A lawyer by name of Johnny Cheo Chai Beng did not know that two witnesses were required for a will. As a result, he was sued and ordered to compensate more than A$719,000 to the 18 children and grandchildren of an Indonesian businessman .

An Indonesian businessman contacted Johnny Cheo Chai Beng by telephone on April 2006. They met within the same month at Citibank’s office at along Church Street. The Indonesia businessman already had a will but wants to have a new will written solely for the purpose of distributing the monies in the Citibank account.

On 13 April 2006, Johnny Cheo Chai Beng sent an email and fax of a draft copy of the will. After some amendments, they met again on 17 April 2006 at Citibank. The will was attested on 17 April 2006 with Johnny Cheo Chai Beng as the sole witness. In fact, space was only created for one witness in the will. This was the strongest evidence showing that the lawyer really did not know two witnesses were actually required.

The story continues that the testator (Indonesia businessman) died on 24 November 2010. The will drafted by Johnny Cheo Chai Beng was found to be invalid. The monies in the Citibank account was instead distributed under the Interstate Succession Act.

To appreciate how serious the implication of the invalid was, let’s compare the distribution intended by the will and the actual distribution via Interstate Succession Act: 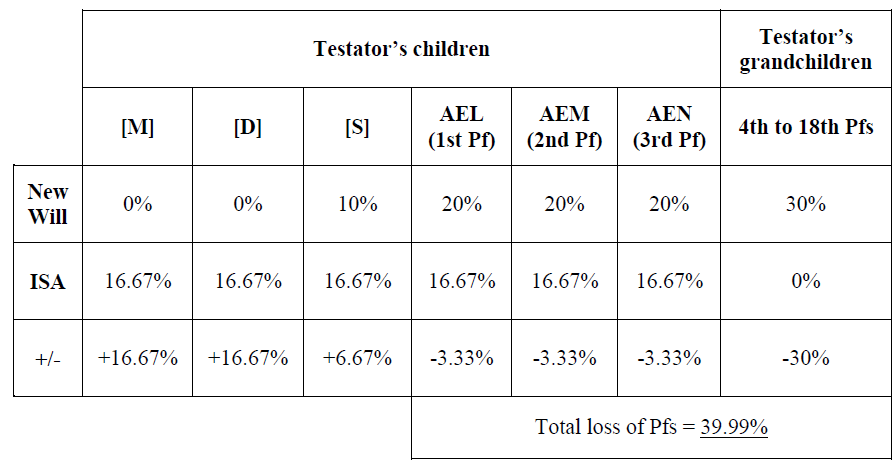 As it can be seen from the above, the testator had 6 children and 15 grandchildren. In the will which he wanted lawyer Johnny Cheo Chai Beng to prepare, he had deliberately excluded two sons from his estate. Moreover, he had intended 30% of the money to be distributed to his grandchildren. Due to the invalidity of his will, the two sons had a windfall and one other son had an increase in his share. The rest of the children had a reduced share. All grandchildren got nothing. Those beneficiaries who got less or nothing sued for the shortfall equivalent to 39.99% of the monies in Citibank account. In the table above, “Pf” means plaintiff.

This is not the only thing that is interesting.

One of the sons who was the unintended beneficiary gambled the inheritance all away while the other son used the windfall to settle his debts. So now we know why the testator wanted to exclude these two sons from his will!

A valid will does not mean a suitable will

This is not the first time a will was found to be invalid and neither will this be the last. But what remains unspoken is that many wills that are valid may actually be not suitability constructed. See my letter to the press: What's involved in writing a will.

(By the way, I almost forgot to tell you that the lawyer Johnny Cheo Chai Beng charged only $340 to the Indonesian businessman. I actually felt pity for him for earning so little and yet assumed so much liability. It is this reason why many lawyers are unwilling to do wills.)