You are here: Home / Insurance / ST forum: Why integrated shield plans are not competitive?

Recently, a number of Members of Parliament wanted the government to regulate the Integrated shield plans to prevent profiteering. I feel that regulation to prevent profiteering should not be encouraged in the free market system like Singapore as it gives the impression that the pursue of excellence in making good profit is bad. Whether profit is good or bad depends on whose perspective.

The word ‘profiteering’ gives the impression that earning outrageous profit is wrong. But the issue is  who is to say exceeding (example) 30% of profit margin is bad? Why is 29% good but 30% bad? Where do we draw the line?

As I do not entirely agree to regulate how much an insurer earns and at the same time felt that the government can better channel its resources to elsewhere, I decided to write to the Straits Times. The following was published on 22 July 2014 Straits Times forum page: 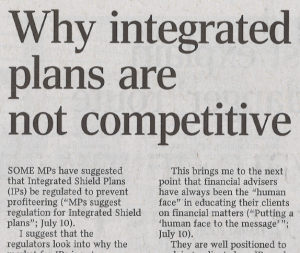 I suggest that the regulators look into why the market for IPs is not competitive in the first place, giving rise to the perception of profiteering.

If there were free competition among the five insurers offering IPs, such plans would be priced fairly.

But this is not the case at the present moment.

Very often, the consumer is unable to make an informed decision when purchasing an IP, as no comparisons are made with other IPs.

Would it not be better if the Government mandated that all financial advisers carry IPs from the five insurers?

To prevent any conflict of interest, commissions could be standardised across these IPs.

The influence of financial advisers cannot be underestimated. They are responsible for the huge number of IPs sold to two out of every three people in Singapore.

This brings me to the next point that financial advisers have always been the "human face" in educating their clients on financial matters ("Putting a 'human face to the message' "; July 10).

They are well positioned to explain to clients how IPs and MediShield Life work - which many Singaporeans do not understand - beyond just the nuts and bolts.

A major reason why Singaporeans have such poor financial literacy is the poor training provided for financial advisers.

Very often, the training they are given involves sales and marketing. Any technical training is for their own products, with little emphasis on government policies.

Since educating clients is part and parcel of the insurance sales process, I suggest that the Government conduct technical courses for financial advisers, especially on topics related to government schemes, as part of their continuing professional training.