Recently there was a few news articles on people who bought old HDB at high prices (Buyers who pay high prices for old flats face reality check). One person was quoted by Straits Times paid a whopping $700,000 3-room flat at Whampoa which has a remaining HDB leasehold of only 55 years. Apparently, it was the third highest price paid last year in terms of psf for HDB with less than 60 years of lease.

So why people do not mind paying so much money for HDB with a limited remaining HDB leasehold?

They are high networth with lots of money to burn 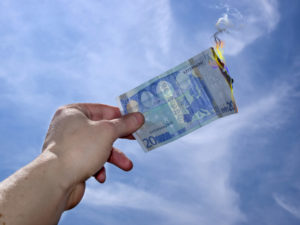 One obvious reason is because they could be high networth. After having so many possessions, they got bored with life and decided to burn some cash to buy properties with a long-term depreciation to zero.

But this reason does not sound very right because a person can only buy a HDB if he or she does not have any other properties. Maybe such a person is not so high networth afterall.

Hope that the old HDB will enbloc

Minister Lawrence Wong was alarmed that old HDB flats are fetching such high prices and he postulated that these buyers were hoping to benefit from Selective En bloc Redevelopment Scheme (SERs). Unfortunately, only a minority of old flats will be offered the SERs.

I find Singaporeans are very naïve. Assuming there is a high chance of old HDB enbloc, it is still a bad idea to expect one can really benefit from the enbloc exercises. The simple reason is because in a SERs exercise, the government will compensate existing owners the ‘market rate’ of the HDB flat plus a fixed SERs grant between $15,000 to $30,000 to buy a replacement new flat. There are two variables that put these owners at a disadvantage: The ‘market price’ which is solely determined by one party (government) and the unknown price of the replacement flat (again set by the same party – the government).

This is in contrasts with enbloc exercises by private property owners in which sellers can negotiate with the developer.

Perhaps the main reason why people overpay for their HDB is because of the lack of long term planning. In the same news article, one person bought a 5-room HDB for nearly $1m with a remaining HDB leasehold of just 56 years. The reason why he bought is because of location. I really wonder what would he say about his location when his million dollar HDB sinks towards zero when he is old. Will he be asking taxpayers to bail him out? I certainly would not.

Assume the problem of being kicked out will never happen

There was another news article which reported that the residents of Geylang Lorong 3 have only 3  years left to stay because the land will return to the State (Home worries surface as lease expiry looms). One resident was quoted as saying “"My home is still standing. I don't understand how it can be worth nothing. Will I still have a home to live in?" Likely the answer is ‘no’ otherwise it will imply taxpayers will have to bail her out.

Another resident of Geylang Lorong 3 was quoted as saying he regretted not selling his property 10 years ago when it was worth $200,000. Personally, I have told many of my clients to sell their properties before its too late. Majority did not want to listen to me and always giving excuses like the property prices no good, location too good, wife will not approve blah blah.

So, what are my recommendations?

Buy a property based on needs and not wants. Sometimes we get mixed up between needs and wants.

Be contented and do not think you are very rich. Rich people don’t buy 99 years leasehold properties. They buy freehold. Very rich people are property developers themselves.

Downgrade and monetise your property before its too late. You cannot eat the bricks off the property for retirement. And stop blaming wife for not giving permission to sell the property (I do not know why wives are always blamed.)

Here is an interesting graph on what happens when your HDB lease runs out: