You are here: Home / Investments / Currency effects of ETFs and Unit trusts (Why this ETF goes up when the stock market crashed after Brexit?)

I always get this questions very frequently from my clients. I ended up explaining the story over and over again until I decided to write this article to clear the misconception once and for all.

The questions that are always asked are:

First, the reporting currency of an ETF and unit trust is immaterial. You must remember that an ETF and Unit Trusts cannot be treated like a stock. ETF and Unit trusts are known as Collective Investment Schemes (CIS). A CIS is merely a vehicle to purchase large number of securities. What is important are the underlying assets and the underlying currencies.  The reporting currency is immaterial when making an investment decisions.

Second, it is important to convert all gains or losses to your own home country’s currency. This is the most accurate form of calculation as it would have taken care of all the currency effects and avoid confusion.

Third, there are ETFs and Unit Trusts that have currency hedging. For such a case, the currency dynamics changes and you now take on the full currency risk of the currency that is hedged against.

I shall give a few examples.

The IEEM is traded in Sterling.

As at end of 24 June 2016 closing price, it appears that the ETF has increased in value by 3.59% as shown below. This is strange because UK just voted to leave the European Union and all the stock markets in the world have crashed overnight. So does that mean there is a gain in this ETF? The answer depends on your home currency.

The ETF is reported in Sterling. But the Sterling has dropped by -6.45% against the Singapore dollar (SGD). Since there is no underlying exposure to Sterling, the ETF has to increase in value. This may give an impression that the ETF made a gain. So you need to calculate the change in value in SGD to determine whether was there a gain. The following is how you can calculate:

Therefore, the change of ETF price in SGD (i.e. home country currency) over the one day period:

So it can be seen that the ETF has actually decrease in value. Which is the expected outcome.

The Fidelity America Fund invests in US companies. The reference currency is USD. It has a few share classes but I will use three of its share classes as examples: 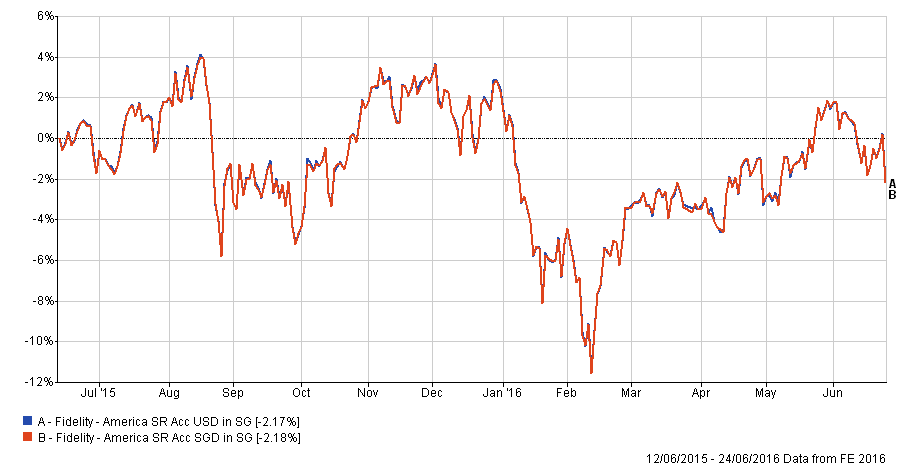 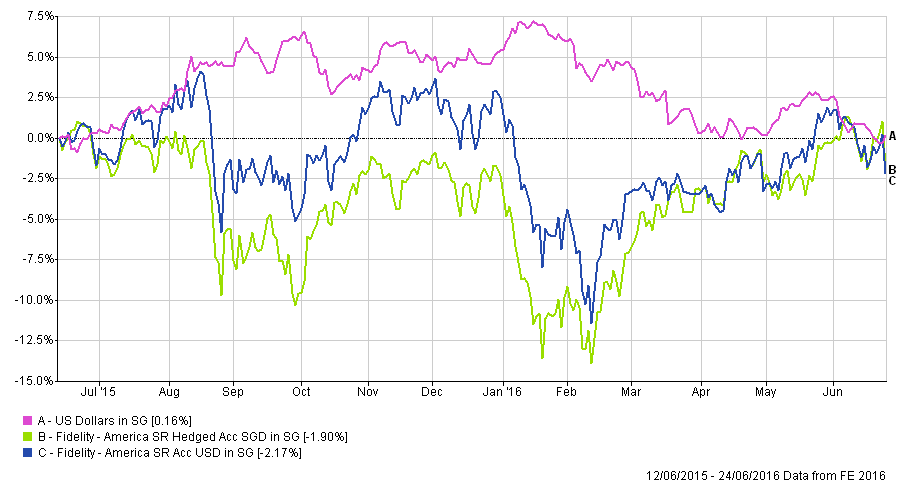