You are here: Home / CPF Matters / CPF Nomination ends up with Official Assignee due to poor financial planning

Central Provident Fund (CPF) monies bequeathed to a bankrupt by a deceased member stands to be seized by the Official Assignee (OA). This is the verdict by the Court of Appeal in the case ofLim Lye Hiang v Official Assignee (Singapore Law Watch). The Straits Times carried the same story available from CPF’s IM$avvy link: HERE.

Last year, I wrote a blog on this sad story (available from this link: CPF monies and bankrupt nominees). The case was about Madam Lim Lye Kiang who was a bankrupt when her sister Lye Keow died of cancer in March 2008. Madam Lim, 52, a kitchen helper, had been a bankrupt for 11 years, owing $1.18 million to 13 creditors. The case was unfortunate because the CPF Member had 11 years to change nomination to someone else.

This story reminded me of the many scenarios where things can go wrong. Has anyone considered the following scenario?

This year alone, I came across two cases (not my clients) where the policyholders previously made a nomination under the Section 73 of the Conveyancing and Law of Property Act unknowingly. As the beneficiary died, the policyholder wanted to make a new nomination only to discover that was not possible because the policy was an irrevocable trust. This means that the benefit of the insurance policy is with the estate of the deceased beneficiary. But the deceased’s family did not apply for Letter of Administration! After careful consideration, I think it is cheaper to simply stop the premium altogether and ‘write-off’ the insurance policy as a total loss because the legal cost to untangle the mess could be more than the value of the insurance policy!

The consequences of poor or absent financial planning can be worse in more complex situations. There are at least four insurance statutory nominations floating around. With effect from 1 September 2009, there are only two kind of insurance nominations permitted but previous nominations prior to 1 September 2009 remain status quo. Under the old nomination framework before 1 September 2009, it was possible to make nomination which may not be valid. Some of my clients show me letters from their insurers which its contents were rather ambiguous. Below is one such letter which is ambiguous: 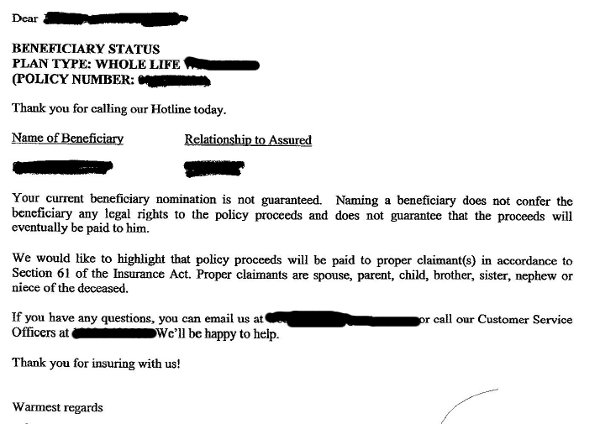 Such confusion over insurance nominations is but just the tip of the iceberg. According to HSBC’s 'The Future of Retirement' report published , 80% of parents did not make any Will. I really wonder what these parents were thinking? Or perhaps there was none to begin with! Without a Will, they are relying on the Administrator to take care of their affairs. What happens if both parents die? The Administrator will become the trustee for the children’s monies. Has anyone thought of the following scenario?

As for the last question, there is a theoretical and a practical answer. The theory is that the children’s monies never belong to the trustee. So the assets are safe even if the trustee dies or become mentally incapacitated. However, in practice the children’s assets would be comingled with the trustee’s own personal assets simply because trustees who are natural persons are unlikely to keep segregated accounts. I am very sure trustees who are natural persons will not be keeping segregated accounts because to do so they must have done a thorough financial planning. Since the financial literacy in Singapore is so poor, it is not likely they have done any financial and estate planning. In fact, these trustee should ensure his own executor is fully aware that the trustee’s assets contain somebody else assets! To make things worse, if the trustee is mentally incapacitated, the children’s monies are stuck in the trustee’s own account.

So, writing a Will will solve all the problems right? Wrong! If the trustee appointed through the Will dies or become mentally incapacitated, there would be similar problems. Again, in theory, there is no issue but in practice, be prepared to pay hefty legal fees! I am very sure the remaining 20% of parents had written Wills that are theoretically correct, but I seriously doubt these Wills are practically foolproof.

This brings me to the conclusion that theory and practice often differ. There is a big difference between academics and practitioners. Academics focus on theories to overcome problems while practitioners focus on workable solutions in the real world.

We started this article with the topic of CPF monies being bequeathed to bankrupt. With effect from 1 January 2011, it is possible for CPF Member to bequeath their CPF monies to their beneficiaries’ CPF accounts under the CPF Enhanced Nomination System (ENS). Academics will now ponder whether would such a CPF to CPF nomination end up with the Official Assignee if the recipient is a bankrupt.

When in doubt, consult your practitioner.