You are here: Home / CPF Are You Ready? / 2-years old daughter becomes fatherless because of the falling tree

“A MAN was crushed to death when a rain tree uprooted and crushed the car he was driving, pinning him to his seat during Tuesday's afternoon's heavy downpour. The 32-year-old driver was alone when the accident happened, sustained injuries to his spine.” – Straits Times 20 July 2010.

According to the newspaper report “Man killed by tree: Family seeks compensation” dated 22 July 2010, the 32-years old project manager has a 2-years old daughter. The young man is survived by his secretary wife of 4 years. The question now is:

When my wife and I first saw this news at the 9:30pm news broadcast, our response was unanimous – all humans die one day but the only question is when. If you are an immortal, you need not read further.

Such news should not cause anyone of us to be drown in pessimism. Instead, the response should be how to make the necessary plans and proceed to enjoy life to the fullest. Many young parents live life dangerously. I am not necessarily referring to engaging in dangerous occupation and sports but the total lack of the desire to plan for the future. There are two plans in life. Plan A and Plan B. Plan A is the current plan that you have – your desire to have more wealth through advancement in career, upgrading your property, saving up for retirement, making sure your kids get a good education and so on. Everybody talks about optimising the Plan A in social gatherings. But nobody talks about optimising Plan B. Plan B is the backup plan in the event of the worst case scenario. Some Christians say that there is no need to have a Plan B afterall life is in God's hand. This I must say is merely a convenient excuse for being lazy. Many financial advisers will say that the Plan B is to buy certain amount of insurance cover to reduce the financial lost should a sole breadwinner dies. Some lucky individuals would have accumulated a significant amount of wealth and so that they do not need so much insurance. All such advice is the truth but only half truth. Nobody tells you exactly how the actual mechanics works. What is the exact procedures in which your life insurance proceeds can be used for the benefit of your dependents? Your existing wealth (if any) – can be used to help your surviving family members but how it actually works? I never come across anyone who knows. Almost all financial advisers do not know. Whether they are “independent” financial adviser or not it is irrelevant because such advice involves no product to be recommended and thus no commission. If there is no commission, do not expect to get this advice. However, many individuals think that such freak accident will only happen to the guy next door. I disagree with that

The following is a table summary from a local life insurer for death claims for the month of June 2010 (click image to enlarge): 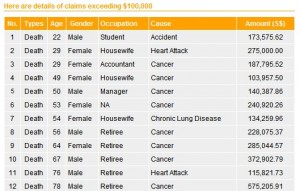 Among the 12 death claims, 7 were from those below 55 years old. In fact, 3 persons were below 30 years old. Housewives, accountants, managers and students are all on the list and these sounds like everyone else including you. Observe that all but one case is due to illness. Apparently it is quite rare to die of an accident. Also, I am very sure among those on the list, some of them have children. But wait - the amount of money paid by the life insurance should have alleviated any financial hardship for the family right? That is what the insurance people have been preaching right? WRONG! Without doing estate planning, it is not likely it is going to happen because there was no Plan B. What in the world is Plan B?

Related link:  AsiaOne's news on No way his death could have been prevented